22 seniors sign on to college at Lost River signing day

Posted in Uncategorized.
By: By SAMANTHA TIPLER, Klamath County Schools
|

All 22 students in Lost River Jr./Sr. High School’s Class of 2018 are headed to university, college or other post-secondary education.

The school and community celebrated with a National Signing Event on Tuesday. Families, community members, staff and students watched as the seniors signed on to their futures after high school.

“It’s a life changing experience,” said senior Lalo Murillo. “Wow, this is really happening? I can’t believe we made it this far. The excitement’s just building up.”

“I think it’s cool that at a small school we get to recognize everybody going to college,” said senior Allison Grounds.

The event included speeches and college representatives congratulating the seniors and welcoming them to the next big step.

“Through a lot of really hard work, our seniors have been accepted to 30 and will sign on to 9 different colleges and universities,” said Jen Johnson, Lost River ASPIRE coordinator. “Seniors, your family, school and community are very proud of you for your hard work and your commitment to your futures.”

“Your decision to advance your education will be one of the most significant decisions of your life,” said Roberto Gutierrez, president of Klamath Community College and keynote speaker at Wednesday’s event. “I strongly congratulate you for making the decision to continue your education. This decision will have positive ramifications, not only for you, but for your future spouse and children.”

Murillo, 18, held the crowd in suspense on Wednesday, deciding between Pitzer College in Clermont, Calif., and Lewis & Clark College in Portland. Both have strong liberal arts programs, which he thinks will make a good foundation for his plans to study medicine or pediatrics.

“I plan to someday open a clinic in Malin, help the members of my community,” he said.

In the end he chose Lewis & Clark, to cheers and claps from a gym full of onlookers. He received enough scholarships to completely pay for his college — a full ride.

Grounds, 18, also received big scholarships from her college of choice, Willamette University. She received more than $30,000 in scholarships and grants. She plans to study law.

“I’ve always liked being able to stand up for people who feel like they don’t have a voice,” Grounds said. “Doing law makes me feel like I can do that.” 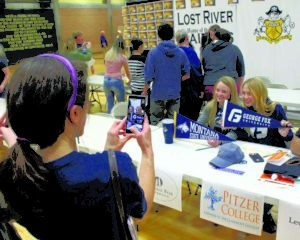 This was the second annual Signing Day event at Lost River. Last year Grounds, Murillo and their fellow students watched 34 students in the Class of 2017 sign on to their colleges and military service. This year, the Class of 2018 set the example for those coming after them.

“Today is not only for the class of these seniors,” Johnson said. “It is for each and every class here. From the Class of 2019 to the Class of 2023, if you have the drive and perseverance that these seniors have, you will be sitting here in front of us before you know it.”