As someone who has run Boeing’s entire Portland, Oregon, plant of 1,500 people, Mike Starr has come a long way from summer jobs weeding onion fields and working on fishing boats.

A small-town guy from Klamath Falls, Starr was raised in a family with a pioneering history of raising sheep in the vast grasslands of rural Oregon.

His father, a conductor with Burlington Northern, and his mother, who worked out of the home to raise their four kids, brought up a curious son who made the most of life’s opportunities to point the way to a successful engineering career.

A mind for math

Starr’s history with Oregon Tech began when he was spotted by the university’s football coach and recruited as a deep snapper for the Owls, receiving an academic scholarship to cover the $1,500 annual tuition costs. While he had always had a talent for science and math, a career in engineering had not yet solidified for him.

But after being intrigued by a mechanical engineering course, Starr was hooked. “My brain just kind of worked that way.”

He thrived in the small class environment and the connections that he built with faculty along the way, with Oregon Tech being a “big” university to him, having gone to a Catholic school in Klamath Falls with 22 students in his class.

After graduation, Starr’s path led straight to a job with Boeing at its Renton plant in Washington when he received two offers from them after attending an Oregon Tech career day event. He started out as a liaison engineer at $27k a year, working on the last military-version of the 707 planes. But six months later when a job opened in Portland, he jumped at it as a way to be closer to home and his large family.

Now 29 years later, Starr is Vice President of Actuation at Boeing and senior leader at the plant in Gresham, Ore., working with “amazing products and 1,500 amazing people.”

Mike Starr, left, and Oregon Tech President Nagi Naganathan, share a moment at an open house at the Oregon Manufacturing Innovation Center in Scappoose. Starr, a 1989 Tech graduate, is the Vice President of Actuation for Boeing in Portland.

Actuation deals with anything that moves in a plane, such as flaps, doors, tail sections, landing gear, shafts, housings and the like. After 30 years of others designing and building this, now they create these parts at the Gresham plant.

“It enables us to control sourcing better,” Starr explains. “Portland is the only plant that does actuation — the rest of fabrication is divided by domains. Our plant is known for its large titanium structures which form the skeleton of the plane.”

These days Mike hires all of the Oregon Tech grads that he can get, “but there’s just not enough of them,” he said. He has seen a high quality skill-set and work ethic among all their Oregon Tech-educated employees, but especially those who were in the MECOP paid-internship program, formerly known as the Multiple Engineering Cooperative Program.

“I’m glad I went to school in the 1980s as today the graduates are so good and the competition is very high. Students are eloquent, team players, able to work together well. Boeing treats them like they’ve been there for a long time because they are so talented and mature.”

Internships the key to jobs

Boeing hires Oregon Tech students from both campuses, Klamath Falls and Portland-Metro (Wilsonville), but rarely takes on engineers who haven’t had internships.

“At Boeing we call internships ‘the long interview.’ It shows us how students solve problems, interact with the team, and their work ethic.”

When asked how Oregon Tech prepared him for his career, and what he had that his colleagues from other schools didn’t, Starr said, “Shop experience. When I was at Oregon Tech I took welding and learned foundry skills. We didn’t just design, we actually made things. So I had an awareness, understanding, and respect for the work that welders did, and how the engineers’ work impacts the welder, and others who work at that type of fabrication.

“Managers at Boeing absolutely appreciate the difference that Oregon Tech MET grads bring, and their ability to apply knowledge.” 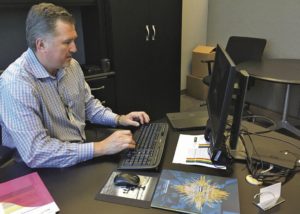 Mike Starr manages some 1,500 people at the Boeing plant in Portland, which makes plane parts.

Starr stays engaged with Oregon Tech through alumni giving and also by helping to promote the university.

“I always say to students, that if they want a successful engineering job, they need to go to Oregon Tech.”

He describes the polytechnic as “hands-down the best MET school around,” with great professors who are interested in teaching, don’t use TAs, and offer small hands-on classes that allow for more professor-student engagement. “OIT is just like MIT, but in Oregon,” Starr said.

These days when not engaged with his demanding work at Boeing, Starr relaxes by digging deep into his small garden, planting and nurturing roses and being a beekeeper.

Married now for 23 years, he and his wife, Eren, have a daughter and son pursuing higher education themselves at Loyola Marymount and Willamette University, respectively.